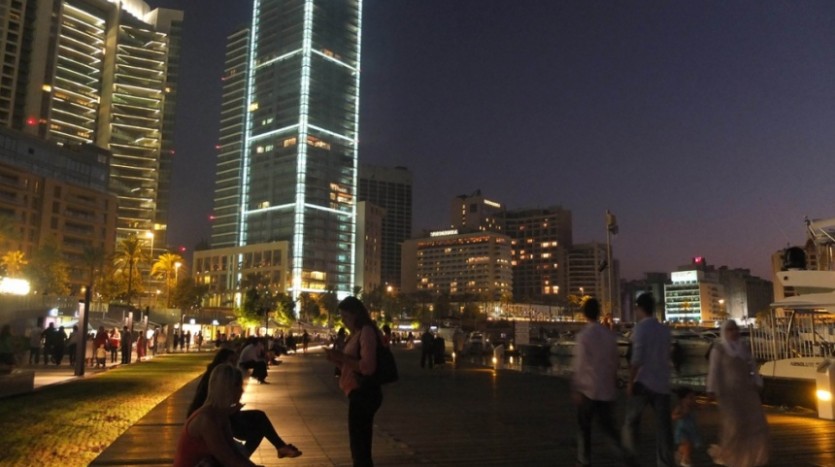 Is Beirut’s glitzy downtown redevelopment all that it seems?

Glamorous young couples twiddle their cocktail stirrers on the terraces of Beirut’s Zaitunay Bay, looking out across a balmy evening scene that could be lifted straight from Monaco or Cannes. The lights of glitzy towers twinkle on the water, as a group of teenage girls stroll along the teak boardwalk, posing for selfies in front of freshly polished super-yachts. At the end of the curving esplanade, the jagged form of a new yacht club, designed by shape-making American architect Steven Holl, juts out into the bay, topped with apartments that boast some of the most expensive views in the Middle East. It is “the premier seaside destination for luxury living and recreation,” according to the marketing blurb, “catering exclusively to the region’s cultural and social elite.”

But, as Islamic State fighters gather at the border with Syria to the east, there is an uneasy tension in the air. It is a looming threat that not even a bottle of champagne on the region’s most exclusive terrace can mask. And there are signs that, beneath the veneer of waterfront sparkle, this optimistic image of Beirut’s glory days – revived like a phoenix, 20 years after the civil war blew the city to rubble – might not all be quite what it seems. The city centre now boasts immaculately rebuilt streets, lined with the stores of Gucci and Prada, Hermès and Louis Vuitton, but the whole place is strangely deserted. There are thickets of new apartment buildings, but few lights are switched on behind the curtains.

There is none of the chaos and energy that defines Beirut. It just doesn’t feel Lebanese any more

At the other end of the bay from the faceted steel structure of the yacht club stands the ghostly carcass of the old St George Hotel, a faded 1930s shell of what was once the stomping ground of film stars and royalty, diplomats and spies, the salacious social epicentre of old Beirut. It now stands as an eerie relic, with an enormous banner draped across its lifeless facade, printed with a three-storey no-entry sign emblazoned with the words: “STOP Solidere”.

Beneath the empty building, a series of displays tells the story of the battle for the waterfront. “St George’s Bay is named after the legendary hero who slew the dragon terrorising its shores,” it reads. “Today the bay and its inhabitants are under renewed attack from a hybrid corporate monster, Solidere, which – neither private nor public – is devouring public property to line the pockets of its backers.” The gunfire and car bombs might have stopped for now, but landowners and developers are very much still at war.

Once a symbol of Beirut’s golden age, the St George hotel today is but a hollow shell at the centre of an epic real estate battle pitting its owner against powerful developers.

The man behind this urban-scale protest placard is Fady El-Khoury, owner of the St George Hotel, who has been in legal deadlock with Solidere, the development company behind the reconstruction of downtown Beirut, for the last 20 years.

“It is the robbery of the century,” he tells me. “They have illegally seized the city from the people who own it, and put back an empty maquette of Beirut without any of the people. What they have done to the city is apocalyptic.”

Solidere (an acronym of Société Libanaise pour le Développement et la Reconstruction de Beyrouth) has steered the development of the city centre for the last two decades, overseeing the postwar rebuilding of an area covering almost 200 hectares; and not without controversy. It is a strange private-public hybrid, founded in 1994 by billionaire businessman and then-prime minister Rafik Hariri, who was assassinated in 2005 – by a car bomb right outside the St George Hotel – since when his family has maintained a major stake in the company. It is incorporated as a private business, listed on the stock exchange, but it also enjoys special powers of compulsory purchase and regulatory authority, giving it the mandate to manage the city centre like a mini-fiefdom.

It was the only way to run the comprehensive redevelopment of a place ravaged by 15 years of warfare, in the eyes of its supporters; but its critics have accused the company of using harassment and intimidation to drive the original residents out. Human rights lawyer Muhamad Mugraby has described their behaviour as a “form of vigilantism under colour of the law”.

read more via… Is Beirut’s glitzy downtown redevelopment all that it seems? | Cities | The Guardian.