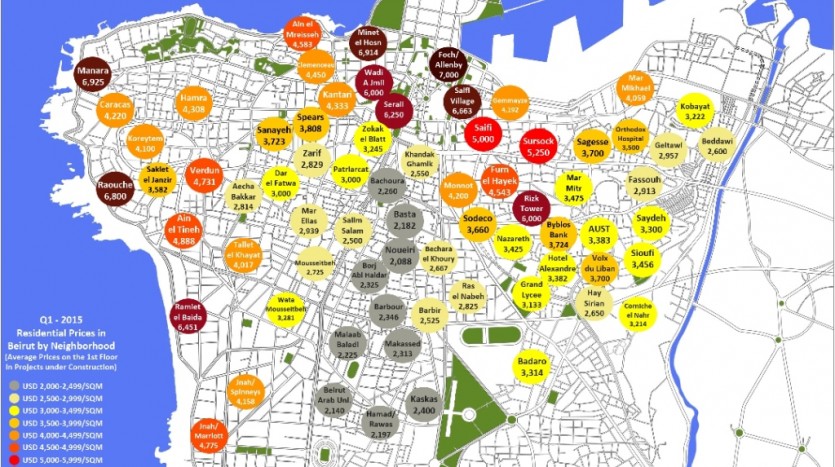 The RAMCO research department produced a map of average asking prices of apartments in 346 buildings among 71 Beirut neighborhoods.

The map of the prices of new apartments, by neighborhood, reveals several indicators of the real estate market of Beirut:

Logically, the seafront neighborhoods of the capital post the highest prices. From Ain el Mreisseh to Ramlet el Baida, averages vary between USD 4,583 and 6,925 per SQM. These prices, however, are not only for projects located on the shores of the Mediterranean Sea but also for projects under construction on secondary streets, where certain apartments do not offer open sea views.

The Beirut Central District (BCD) has been divided into five geographical sectors. Averages on the first floor vary between USD 6,000 and USD 7,000 per SQM. Overall, prices have dropped over the past 12 months. As there are no projects currently under construction around the Bay of St. Georges, averages have dropped compared to last year. The highest averages are located in the area of Foch-Allenby, which enjoys views of the Port of Beirut.

Not a single neighborhood in the capital posts prices below the symbolic bar of USD 2,000 per SQM. The lowest prices are found in the central neighborhoods of Beirut, between Bachoura and Tarik el Jdideh, and vary between USD 2,088 and USD 2,400 per SQM.

Beirut the next hotspot?
Beirut’s Memorial to Civil War